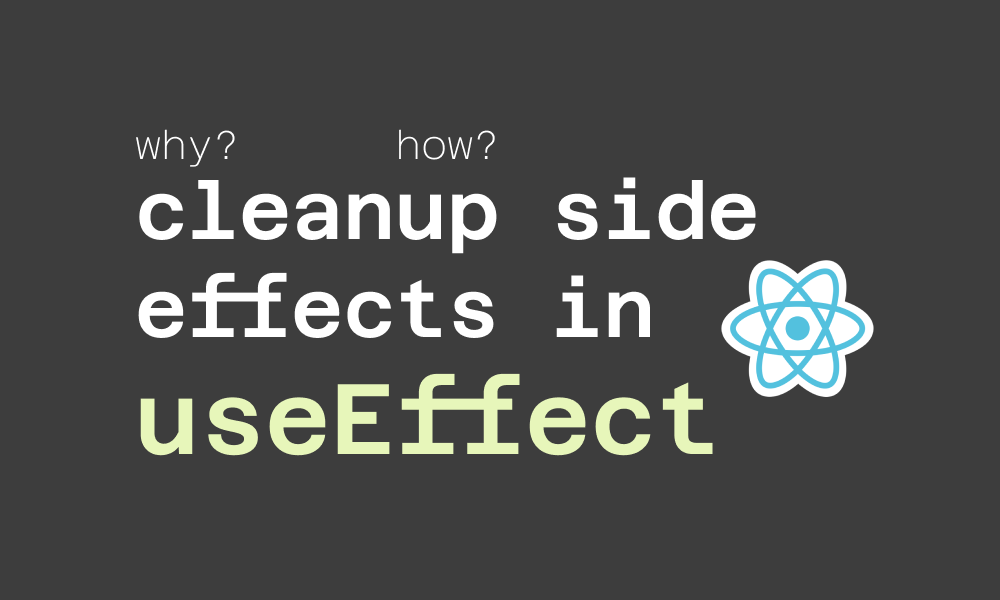 Well, because cleaning up is generally a good thing :)

Side effects happen a lot in React applications (in web applications generally. These effects include making asynchronous API calls, updating the DOM, creating sockets, etc. These side effects can happen when a button is clicked, when a form is submitted, or when a component mounts.

The useEffect hook in React gave functional components the power to do stuff when a component mounts or when some props or state changes. This hook also allows you to cleanup when the component unmounts.

In this article, I'll answer these questions, and hopefully, you will get a better hang of the useEffect hook at the end of it.

What are side effects cleanups in React components

Cleaning up side effects in React is a way of stopping side effects that do not need to be executed anymore. A common reason why side effects can be irrelevant is when they are unmounted.

I order food at work, I get home, and the food arrives at work. What do I need the food for anymore? Feels like a waste of money. As a cleanup, I would want to cancel the order before going home if I do not get it.

Why should you cleanup when a Component unmounts?

In some cases, Garbage Collection manages memory and clears up such memory usage. But if the side effects "keep working", it will keep using that memory. A good example is a WebSocket connection created by a component that unmounts later on. Since the connection keeps working, it will be a memory leak (it is constantly connected and waiting for events).

2. To optimize our applications for a good user experience

With many needless things happening in the background, there is more memory usage. This is still linked to the memory leaks situation. The more the memory usage, the lesser the available memory to do other things, thereby affecting the user experience on your application. Responses may be delayed, interactions may be delayed, and things like that.

3. To prevent unexpected errors in our applications

Sometimes, these are also necessary to avoid bugs in our applications. A great example of such bugs is when you are trying to "do something afterward" when a side effect completes, such as updating the state from a component that has unmounted.

Let's see a quick code example. Say we have two components, App.js and Random.js like this:

The Random component, on the other hand, has a state state, and on mounting, with a timeout of three seconds, updates the state state.

But after one second, this Random component unmounts, which means on the third second where the component oughts to update the state component, it won't exist. Running this gives this error:

To avoid such errors, you have to clean up the side effect that does this update.

However, here's a pull request with an intention to remove this warning as setting state on unmounted components may not necessarily cause a memory leak. I'd still recommend that it is helpful to cleanup such cases to avoid bugs in general.

How to Cleanup side effects in React

The syntax of useEffect is:

Any returned function in callbackFunction serves as a cleanup function like this:

The cleanup function is a way of "cleaning up stuff" before the next thing happens. The next thing can be the component unmounting, or it could be the next rerender (after state changes, for example).

Use cases for cleaning up side effects in React

There are many forms of side effects, but we'll look at three use cases.

1. Cleaning up API requests on unmount

In the cleanup function, you can abort requests using AbortController in fetch or axios. I believe they will also provide some abort methods for other request libraries.

Here's how it looks in code:

If the component unmounts and the fetch request has not been completed, the request is canceled.

When you create a WebSocket connection, you can close it in the cleanup function. Here's how:

With this, you won't leave socket connections on (and potentially create unlimited connections) when a component unmounts.

When you declare a setTimeout, you can cancel it when the component unmounts. Here's how:

With this, you don't have to worry about uncompleted timeouts when the component unmounts because they will be canceled.

The cleanup function in useEffect is a handy function that gives us as much power as class components. There's the componentWillUnmount lifecycle method in class components, triggered when a component is about to unmount.

This cleanup function helps us clean up side effects that are no longer needed when a component unmounts. Such things include API requests, timeouts, socket connections, etc.

I've also shown you examples and use cases where cleanups can be effective.