The concept of middleware in Express 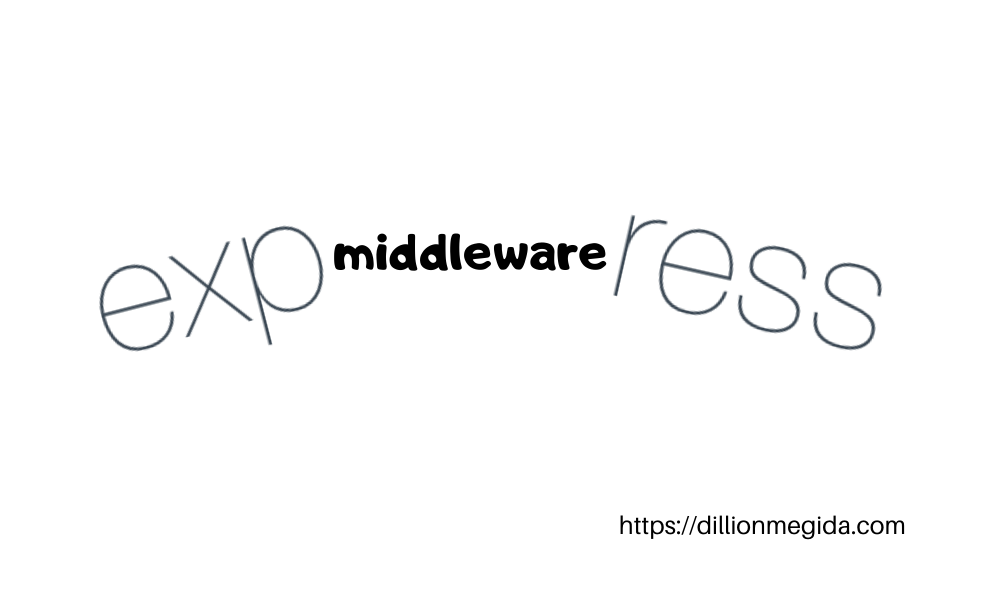 Express is a NodeJS framework that provides a lot of features for web and mobile applications. Middleware is a popular concept used in Express as well as other languages. In fact, most parts of express works around middlewares. But what does this concept mean exactly? The idea behind middlewares in Express remains the same in other languages, but this article is about Express.

Middleware as you assume, is some 'action in the middle'. At the middle of what? Some functions (or before a function). This means some activities are done in the middle before the next function is invoked. These activities could be many things - validation, confirmation and a lot of other things.

Most use cases of middlewares are 'checks' to ensure that the next function to be run has the right or the requirements to do so. Let's go through a small application to see how middlewares are used.

Let's have a server.js file with the following codes:

This is mostly all you need to begin with express. With node server.js ran on the terminal, our server is started on port 8000, and requests on localhost:8000 can be handled by our application.

Next, handle some requests with express:

With the above, any requests sent to localhost:8000/ will evoke the function sendMessage. The response and reqeust are prefilled with objects by NodeJS which helps us control the properties of the request (such as url, device, etc) and the response (which controls what we are sending back) respectively.

Are you familiar with this: (req, res, next)? This is where middleware comes in. Let's have two request handlers and two functions as follows:

Note that: next can be called anything - callNextFunction, callNext and so on. But next is succinct enough to understand, hence many developers do this.

Notice we didn't use next. Now restart the server and enter localhost:8000 in the browser. You'll notice there's nothing in the browser, and it's continuously loading. In the terminal, you'll see a message 'I am the first function!'. It's continuously loading because the response has not been sent yet. We'll look at response.sendName soon, so don't worry about that for now.

You'd also notice the sendMessage2 was never evoked. This is because the request to '/' has already been handled by the first function. And once a request has been handled, express does not check other functions, except been told to do so. How do we tell it to do so?

NodeJS passes a third argument (callback) to the function which when called, allows express to check other functions which can be used.

When the server is restarted, and localhost:8000/ is fetched, a couple of things happen: "I am the first function" and "I am the second function" is logged to the console, and "I am express" is displayed on the browser. Now we can see that sendMessage2 was evoked. This means after express finished with the first app.get, it continued to see if any other actions apply at that point in the time. And fortunately, the next app.get applies. Look at it this way:

Normally, after a request is handled, express stops there. But with next evoked, express does not stop in the function. It assumes, there are more things that can be done.

If the next app.get was handling a different route, say '/about', express checks the codebase, and since nothing applies, express is done. This is the same thing that would happen when you request a route like /help which does not exist. There is nothing express can do : (

In our case, sendMessage can be seen as a middleware. But note that if the positions of the app.gets were switched, sendMessage1 would never be reached because sendMessage2 does not call next.

Now, what about response.sendName? Remember one good thing about javascript objects? Properties can be added or modified at any time in the application. This means at sendMessage1, a new property which is called a method (function on object) is added to the response object which calls response.send. Since express passed through sendMessage1, that method was added, so any function that uses the response afterwards has access to the method. But if sendMessage was never used, the response object would be intact.

One popular usage of middlewares is to pass them between the route and callback function (which controls the request and response) in a function. Example is:

So sequentially, "I am a middleware!" is logged to the console and "Hello there!" is displayed on the browser. If printName never called next(), sendMessage would never called. Another thing we can also experiment is:

We get an error! "Hello from middleware!" is displayed on the browser, "I am a middleware!" and "I am a callback" are displayed on the terminal, but the second response.send throws and error (Cannot set headers after they are sent to the client). This is because a response has been sent already, and cannot be sent again at the same instance.

There a different use cases of middlewares like I stated earlier. printName could be a function that checks if the client is coming from chrome device. With this you can say 'If the user is from chrome, call next else response.send("You are not from chrome, we can't help you")'. There are of fun things you could do with middlewares right?

If you have any questions, you can reach me on Twitter - @iamdillion