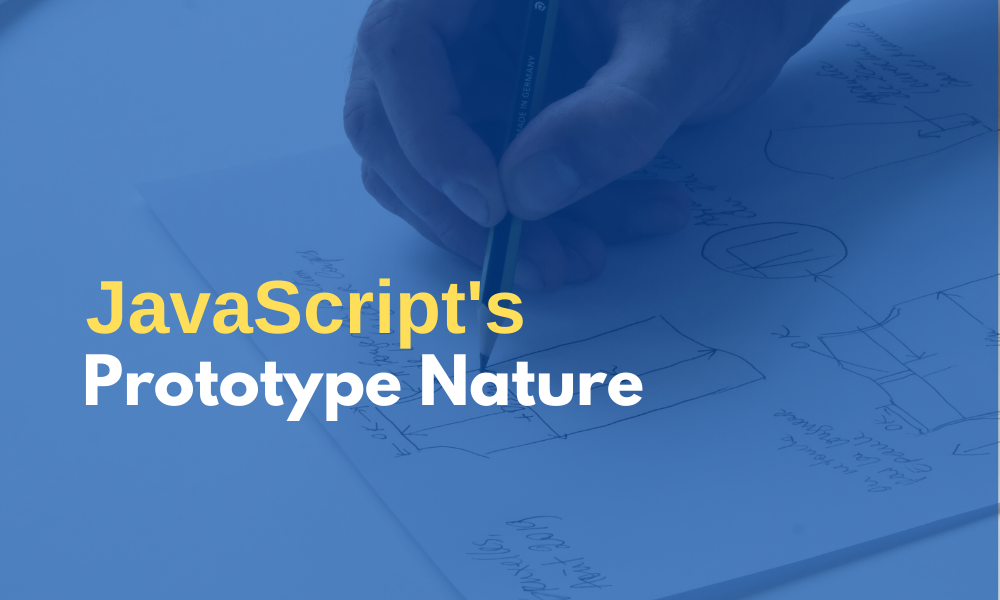 JavaScript is a prototype-based object-oriented language. Although, you'd see the class keyword (in modern Javascript) but it works as prototypes at the background. I explained how the class keyword works in this article on this.

In this article, we'll look at the prototype nature of JavaScript, as well as the Prototype chain in objects.

But animals does not have a method called hasOwnProperty so why aren't we having undefined? By the end of this article, we'll understand how this works and more.

The concept of prototypes

A prototype according to the dictionary is:

a first or preliminary version of a device or vehicle from which other forms are developed.

A graphical example to best explain this, is this vehicle example in the diagram below: 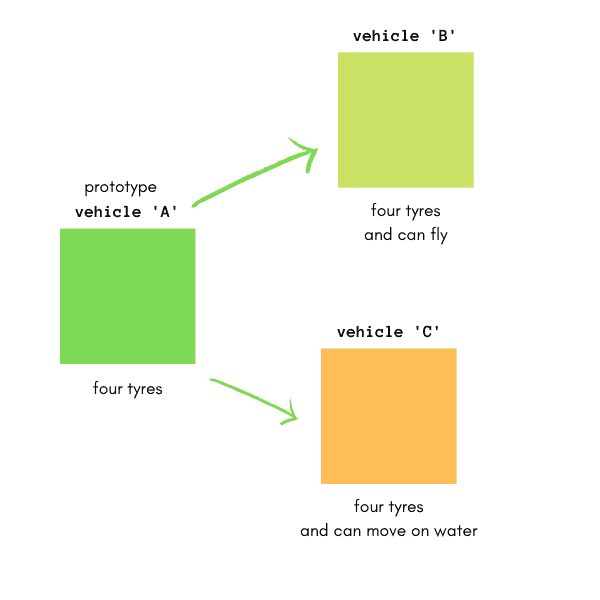 JavaScript works on the basis of prototypes. At the declaration of every function, the JavaScript engine adds the prototype object property to that function which makes the function a prototype that other versions can be created from. You can confirm that with this example: 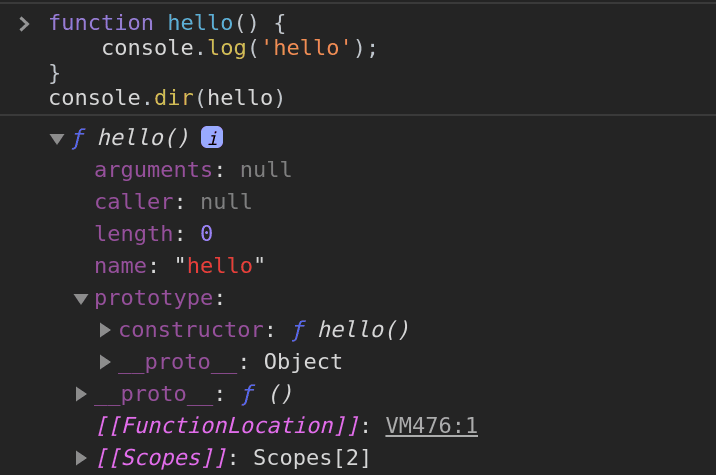 The result (as seen in the image above) shows the properties of the function hello which includes prototype. Another property called __proto__ can be seen. More on it later in this article.

The prototype object has two properties: the first being constructor and the other being __proto__ (again). The former points to the hello function while the latter points to Object.

The benefit of Prototypes

To explain this further, let's look at constructor functions, which is one way of creating objects.

Hello with a capitalized first letter is a convention to show that a function would be used as a constructor function (that is, used to construct an object). 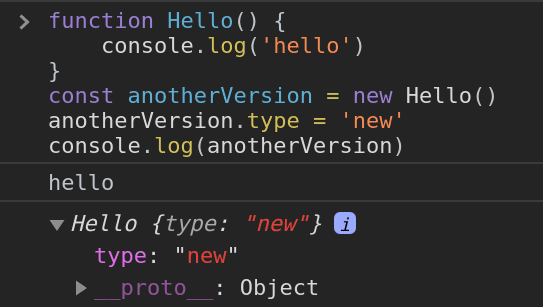 The result shows us now that anotherVersion is a new object built from Hello. This can be a great way of creating objects with an existing skeleton (how the object should look), but problems set in when you want similar objects to have the same features (do the same things) using the constructor function alone. For example:

The this variable used in Obj points to the object calling the function Obj (which in the above code is javascript and php). Learn more about this in this article

We can see that while php and javascript have different name values, they have the same function code. What if php never uses its printName function, that would result in memory wastage especially when many other objects are created from this constructor function.

With prototypes, you can create just one copy of printName and every object created from that prototype can have a different name value. 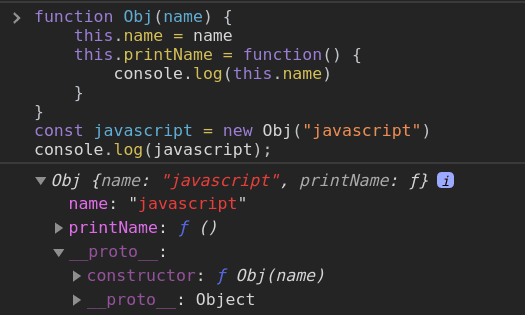 From the image above, you'd see that the __proto__ (called dunder proto) property which connects to our prototype Obj (more on __proto__ later in this article) has a constructor which points to Obj(name) - our function. Confirmed!

Now we know that the prototype property of a function makes that function a prototype that can be used for creating other objects.

What if the prototype property had other properties asides constructor and __proto__ since as we know, JavaScript properties can have new properties attached at any point in time? Let's see: 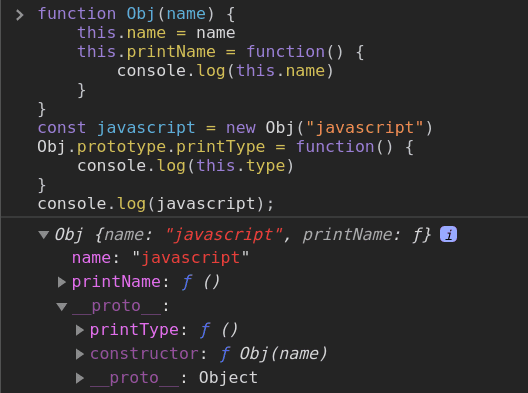 How does JavaScript do this? First it checks if the method exists on javascript and if it doesn't, it checks the __proto__ property.

This is the concept whereby an object inherits features from another object (which is the prototype). This relationship is shown on the __proto__ property.

Backtrack to the last image, you'd notice that __proto__ of javascript also has its own __proto__. As you may guess, this means that the object Obj which is used as a prototype, also inherits some features from another prototype. This is called the prototype chain. 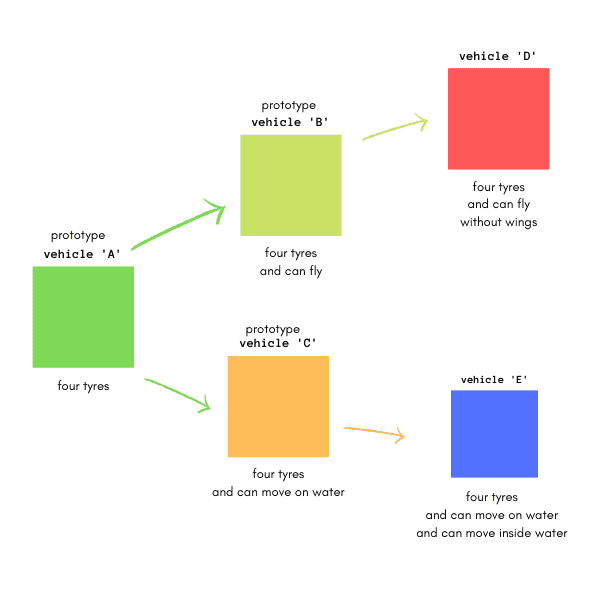 This means that an object can be a new version of a prototype and at the same time be a prototype for another object. So, when you try to access a property on an object, JavaScript starts checking from the object to find the property, and if it doesn't, it continues checking the __proto__s all the way up until there is no __proto__ or the property is found.

undefined is returned when such property does not exist.

Back to the first code block:

Things should be clearer by now, right?

Object in JavaScript has a prototype which all objects inherit from. Constructors like Function, String and so on also inherit from Object. When a function is created (using the constructor or the literal method), it automatically has access to the Function's prototype properties (which also has access to Object - prototype chain).

This is what makes things like 'string'.toLowerCase() possible. The prototype object of String constructor has all of those properties, hence, string values can use them.