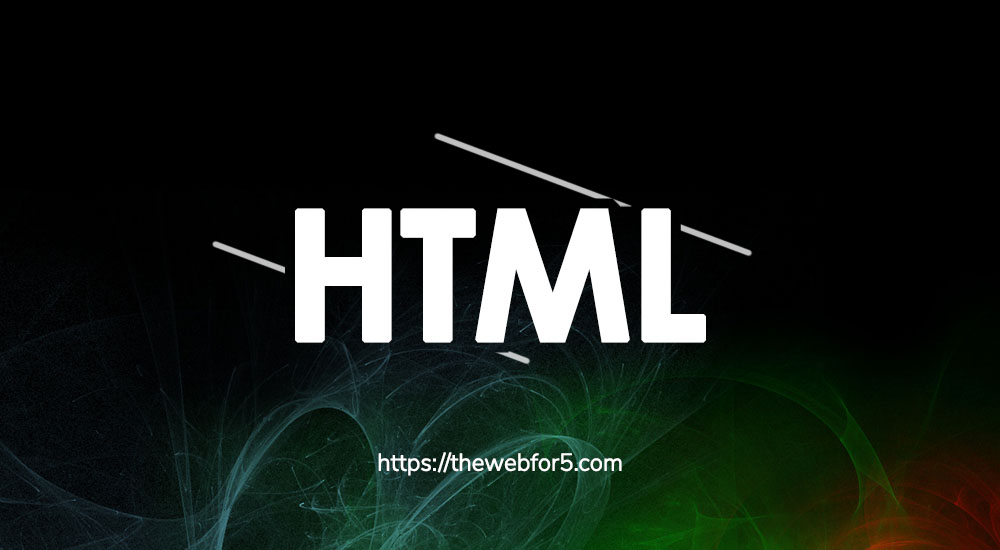 HTML stands for HyperText Markup Language. It is the standard markup language for building webpages. Let's break these terms for simplicity.

What is a Markup Language?

A markup language is a computer language used for defining, processing and presenting text. It has its own syntax (like every language does) used for formatting texts. The code for editing texts are called tags. All definitions for how texts are presented are in files which when opened by applications (which can interpret the definitions), the designed presentation is displayed.

What does the term HyperText mean?

HyperText is a text which contains links to other texts. The other texts can be within the same document of this text or another document (or webpage). For example, when you click on this link, it redirects to the homepage of this site. this link is called a hypertext because it references another document. It is called hyper because there's more information about the text than what is seen.

Putting these terms together,
HTML is a language which defines the content of web pages. It tells a web browser what content to display in specified formats. Contents varies from headings to paragraphs, to lists, links, images and so on. These contents may not be styled as that is not the official work of HTML. Content styling is done by a language called CSS. Check out this article for more information.

To create a HTML document, you'll create a file, then save it with an extension of .html. When you trying opening any of such files with a browser, the browser will attempt to interpret the definitions made by the language and display it as a web page.

To edit a HTML document, you'll need a text editor (such as Sublime Text, Notepad, Notepad++, Visual Studio Code) to open the file which you can begin making your definitions.

"You mean I can create a webpage with Notepad?"
Yes, you can!

Comments help you locate certain areas of your codes easily. You have a 10-line code and feel its unnecessary to put any comments, but what if you like up to 500 lines of code or more - Comments. They are not part of the program itself when the program is running, but they are always in the source code.

You would also need comments to remember the exact thing you did while writing your codes.

Syntax for CSS HTML is;

The first is for single line comments while the second is for multi lines. In short, anything found between <!-- and --> is a comment.

Tags are used to define contents. For headings, HTML provides h1, h2, ..., h6 tags, for paragraphs, we have p tags and so on for many different formats. These tags are placed betweem angle brackets.

Contents are referred to as elements which are enclosed between tags. For most elements, the tags need to be closed when opened. For example, a header element is created with <h1>My header</h1>. <h1> is the opening tag, and </h1> is the closing tag. Take note of the slash (/) before the tag name. But there is an exception - void(or empty) elements.
These are elements which are empty (though not literally). The tags for these elements do not need closing tags. Examples are <br>(for line breaks), <img>(for images), e.t.c.

Some HTML tags possess attributes which can be used for advance definition of elements. They are not generally used for styling, but sometimes define how an element is displayed. These attributes are declared before the closing angle bracket of the opening the tag. The syntax for declaring attributes is;

Also Note that the spaces do not mean anything to the browser. We could have everything on one line like this;

but readability would be difficult. This is the same reason why CSS stylings are arranged spaciously.

For example, let's look at a header element with the align attribute used for positioning the element.

The element above would be placed at the center of the available width of the container.

Take a look at the following code;

Just like a family, these tags are somewhat related.

This helps us in knowing how to address elements. This address also plays an important role in knowing which elements to style with CSS.

Structure of a HTML Document

The structure is in the following order

This is where our HTML page starts from. It is referred to as the root element of the page. Everything between this tag and it's closing tag

is what the browser will render. The extra lang attribute defines the language of the document - in this case, english (en)

"Does this do the brain work?"... something like that
This part of the program specifies properties and features of our page. The contents here are not displayed on the browser. For example, the title of the document is stated here with the title tag, the theme color is also stated here and so much more.

Well, the user has to see something. Maybe, the body, right?
This part of the program contains what will be displayed in the browser. It consist of the contents which in our case is a header element, a paragraph element.

There's more to HTML than the above. We'd explore more in future articles. Stay tuned!

A building construction example with HTML, CSS and Javascript

This illustration for building a house was from Intro to Web Development in Frontend Masters. I also used the in an [Introduction to web development](https://docs.google.com/presentation/d/1FQYRiO8JR1Rgo11PiM5F43KgViuhBsYkftXPRoIAofE/edit#slide=id.g60460f161e036) presentation I made and in other articles on this website

CSS determines the different styles which are applied to the contents to make the building firm and attractive. i.e CSS accurately determines the position and width of each blocks, the color of the roof, the particular way a content should be displayed and so much more. With HTML and CSS, you already have a building. Javascript may not be necessary.

Javascript comes in when you need interaction in your building. What does interaction mean? When the user opens the door with a key, what should the door do? Open right? Interaction. The HTML and CSS just defines the structure of the building, but there's no response to action. Javascript enables the actions.